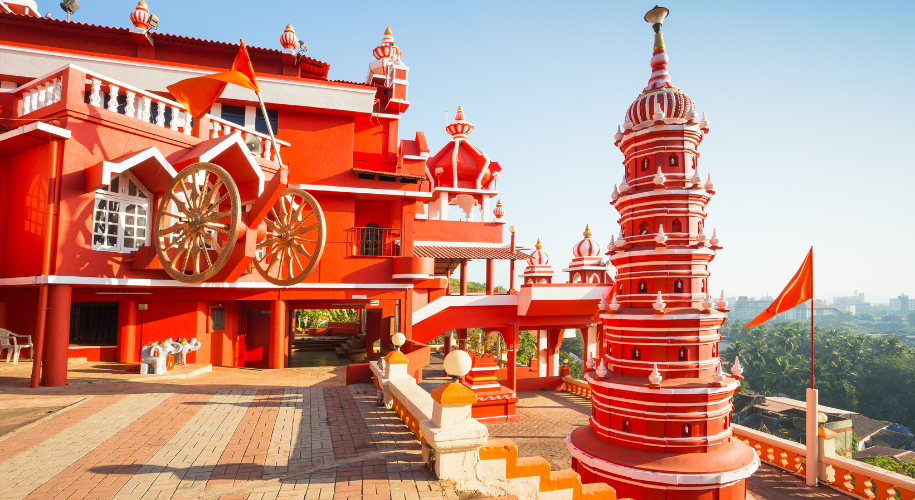 Goa is famous as the “Party Capital of the Nation”, but it is not just about the parties alone. There are ample magnificent and divine temples in the state, which most may not know of. The place boasts of some great ancient Hindu temples with unique historical insights. It may sound quite weird as the state is known to be the party destination for many people. For accommodation purposes, there are many budget-friendly hotels in Goa where you can stay. So, in this post, we will look at some of the most popular temples of Goa that are worth visiting. So let’s begin.

Situated on the peak of the Altinho hill, the Maruti temple is dedicated to the Hindu god Lord Hanuman, also known as the monkey god. It enshrines Lord Hanuman as the presiding deity. The temple is lit up at night, looking extremely stunning and brightly visible from a distance. The visitors visiting this divine temple can also view the charming octagonal Deepastambha or lamp tower at this temple.

Mahadeva Temple - To Experience the Divinity of Lord Shiva

The Mahadeva temple, also known as Tambdi Surla, is situated in one of the most tranquil sites and is enclosed by lush greenery around the corner. It is concealed in a clearing, which may be small but designed magnificently inside a jungle. It is believed that a huge King Cobra snake resides in the main hall at night. The temple is considered the oldest temple in Goa and is said to have outlived the Christianising of Goa by the Portuguese and numerous Muslim invasions.

Brahma Temple - To Worship the Creator

Situated in Carambolim, it is also one of the oldest temples in Goa. It is also called Brahma Karmali, which is named after the nearby village. It attracts several devotees around the area. It is said that the shrine inside the temple is significantly old, from the 12th century. The shrine is also designed in an extremely intricate manner. It has a rich history, and the simplicity and divinity of the place allures and relaxes visitors who visit the temple.

The unique Shri Bhagvati temple is dedicated to the Hindu Goddess Bhagwati, an incarnation of Goddess Parvati, the wife of Lord Shiva. It is also one of the oldest temples in Goa and is said to be more than 500 years old. The Shri Bhagvati temple complex includes five temples, with the primary temple of Shri Bhagvati and other temples of Shri Sateri, Shri Dev Ravalnath, Shri Dev Bhivangi Panchakshari & Brahma (Shri Vishnu, Shri Ganapathy, Shri Shankar).

Mangeshi Temple - To Appreciate the Combo of Architecture and Divinity

It is the most visited temple in Goa and one of the oldest in Goa. The temple is dedicated to Lord Mangesh, an incarnation of Lord Shiva. The presiding deity, Lord Mangesh, is revered in the form of a Shiva Lingam, which the Saraswat Brahmins have brought up in Goa. The major highlight of this temple is the seven-storey deepstambha which is a stunning sight to experience and capture, especially when lit with earthen lamps at night.