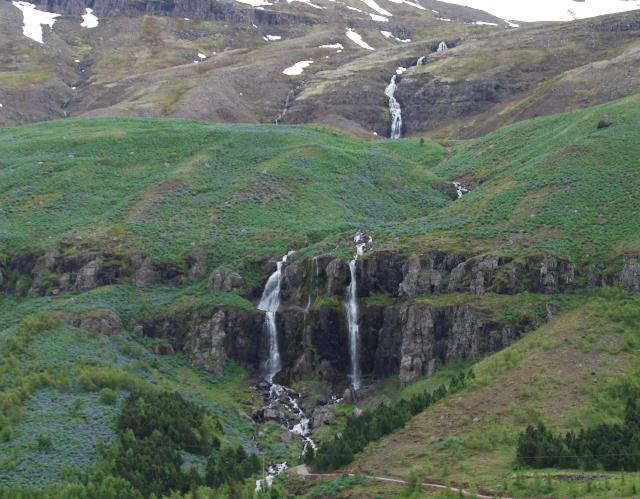 There seems to be a waterfall around every corner in Iceland, but on our recent cruise port call we saw only a few of them. Even then, it could be argued that we didn’t see the best of them, but we probably saw the best known. Even as we sailed into Seydisfjordur, we were flanked on both sides by the steep banks of the fjord - and down those banks cascaded waterfalls. We were particularly struck by one, which divided into a twin fall, leaving a sort of island perched on the hillside.

But falls such as this, however beautiful and stately, are but a trickle compared to the ones to be seen elsewhere in Iceland. We’d already had a glimpse of the Godafoss on the way up to Lake Myvatn, and most people would be satisfied with even that. But, we got off the bus on the way back, and took a walk along the top of one of the cliffs bounding the river, to see the falls at their even more awesome. It’s even possible, with a lot of care, to climb down to the river bank, and scramble over the rocks for an even better view.