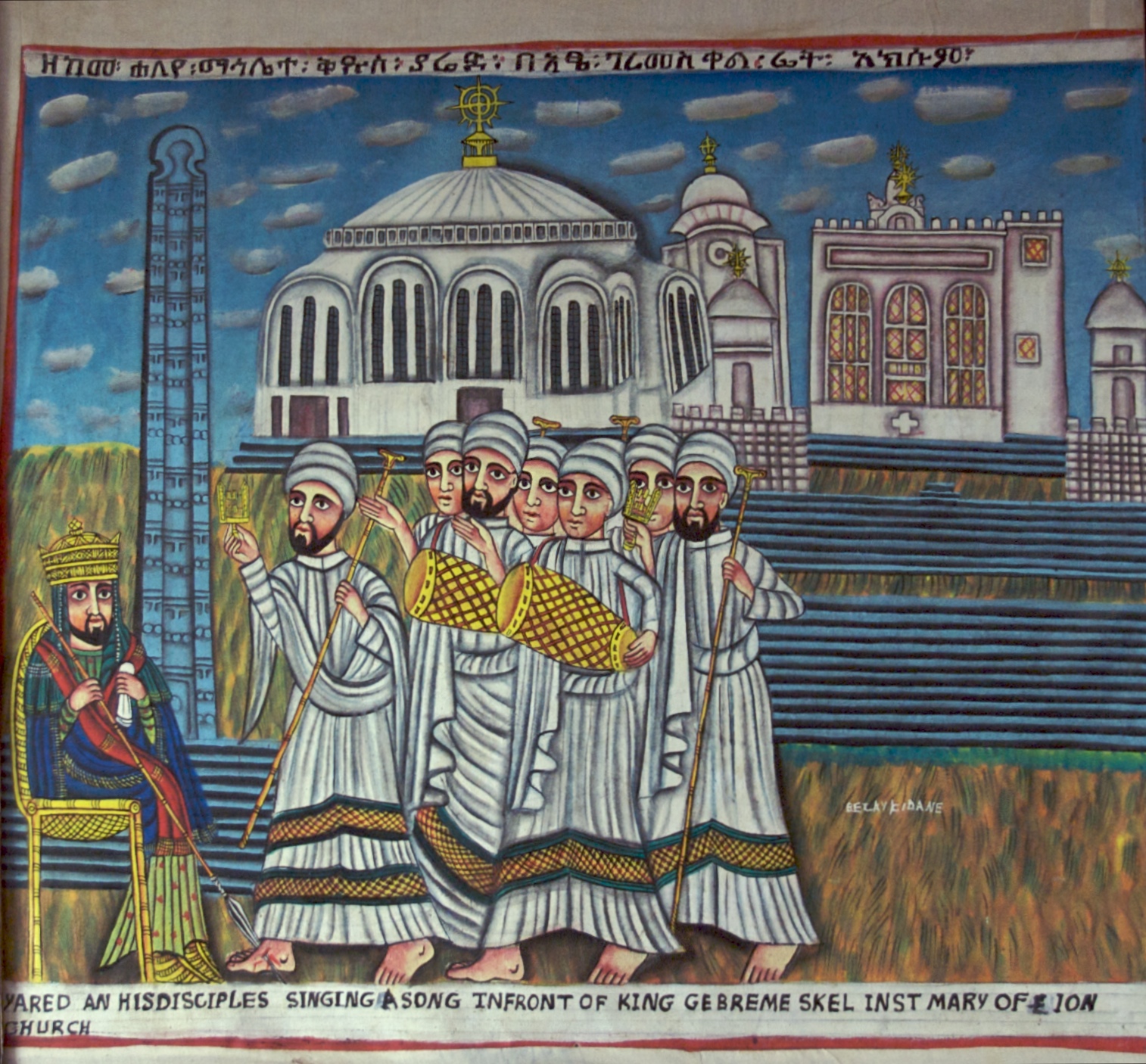 Born and raised in Ethiopia, Saint Yared is the foremost composer of Ethiopian Orthodox Church song melodies. Yared was born on April 25, 505 A.D. in the city of Aksum (Axum). His father was named Adam and his mother Tauklia.Qine. A very high, elaborate, cryptic, complex form of Ge’ez poetry is credited to Saint Yared of Ethiopia.  It is usually rich in religious,historical and legendary allusions. Nevertheless, Yared’s place in Ethiopian culture is what it is on account of his being the most subtle, most spiritually uplifting, and most euphonic composer of both the hymns and the chants that accompany them. He further established the order of their service by time of day and day of year, by the occasion of the feast and by its import, by the character of the religious season and by its dominant theme and mood. The all-inclusive account of his melodies is called Deggua. The three basics melodies by which Yared’s hymns are sung are Ge’ez, Izl andAraray. Symbolism is basic to the entirety of Yared’s system and each melody symbolizes the person of the Trinity: Ge’ez the Father, Izl the Son and Araray the Holy Spirit.For the inexpert or the inexperienced, the differences between the three melodies aredifficult to detect. For the experts, it's simpler, although even they admit that it is a little tricky when asked to describe the differences.

Yared and the Inspiring Insect

One inspiring anecdote is most often told of this great personality. Yared’s father had died when he was a little boy and his uncle Gideon had to take care of the child. Yared, once he'd fled from his home for Gideon his uncle kept punishing him for his idleness. Yared as a child was not smart enough to learn his church teachings fast. His uncle Gideon was very disappointed of this sluggish personality of the child. So Yared fled from home. Heading nowhere in particular, he became very tired. Seeing one green tree from afar, he walked over to the tree and rested himself under it. While his eyes were getting shut for he was sleepy by now, he saw a little insect floundering over the trunk of the tree. It was not that easy for the insect, though. Stumbling but struggling, the insect kept falling back to the earth and restarting its hopeless climb. It never gave up. It all went on like this for six times. Yared, by now was awakened; his body had forgotten its tiresome day. His eyes never blinking, he stared on the insect following every movement. Eventually, the insect succeeded reaching to the top of the tree where the mushrooms it fed on were great in amount. At the seventh trial it becomes triumphant. Yared went back to his home for he understood that he never should have given up and he will never so. He learned all the church teachings from then with great enthusiasm. And, eventually, he was able to create the everlasting melodies.