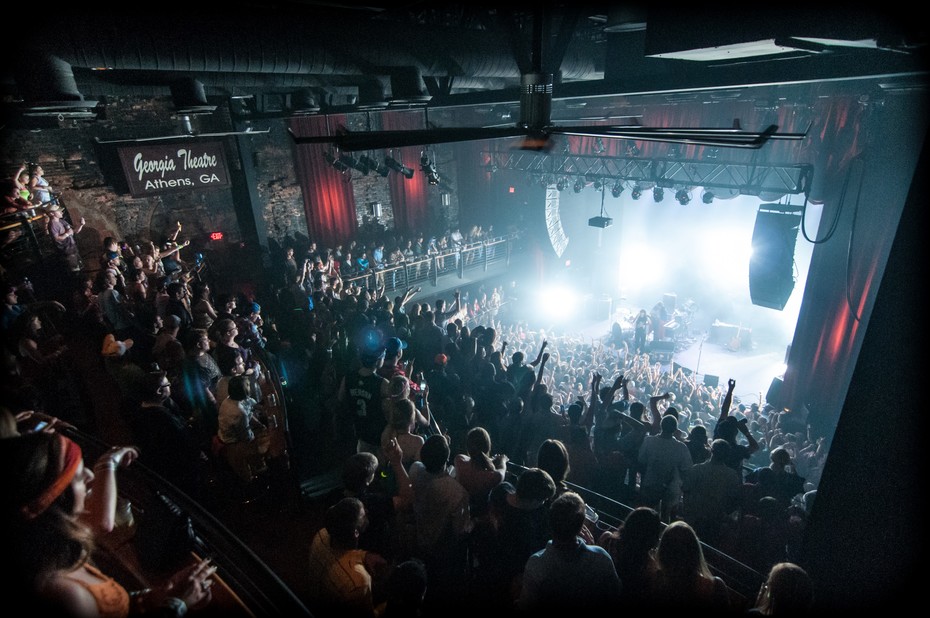 Hundreds of people who were jammed into an amphitheater swayed and clapped their hands in time to music. Not far away, a much smaller crowd listened with rapt attention as a trio combined the sounds of mellow jazz with hip-hop.

Music fans gather in large cities like Los Angeles and Las Vegas to treat their ears to favorite melodies and harmonies. Others around the country enjoy their preferred tunes and performers where they live, or close by.

The Sounds of Music Are Everywhere

Pop concerts, jam sessions and other offerings are everywhere. Whether you favor soul or swing, rock or rap it’s likely you won’t have to travel far to hear it. Another benefit of seeking out the sound of music in lesser-known venues is the opportunity to see rising stars before they achieve national fame.

In 2009, a series of redevelopment projects revitalized a downtown district of Provo, Utah (pop. around 115,000). That nurtured a thriving music scene which contrasts with the quiet and conservative reputation often associated with Mormon-influenced towns. One local band manager has described Provo as “the new Nashville, where artists go before they get big.”

Meanwhile down in Texas, while Austin is especially reknowned for its music scene, some of the state's smaller places also do pretty well for themselves. For example, Denton (pop. 140,000), an hour's drive north of Dallas, was once was named by a popular entertainment magazine as the best music scene in the nation. It’s home to more than a hundred bands and at least two dozen music venues within walking distance of the town square, plus the first weekend of April, the Denton Arts & Jazz Festival brings more than 200,000 music fans to town - all giving plenty of credence to Denton’s boast that “music is part of our DNA.”

The same claim also holds true for another Texas town, where concert theaters, coffee shops, breweries and even the courthouse lawn serve as sound stages. San Marcos (pop. about 68,000) has bragging rights that it’s where George Strait, “the king of country,” played his first several hundred shows.

Up in New England, one of the claims to fame of Lowell, Massachusetts (116,000), 40 minutes northwest of Boston, is that the 1950s “beat” writer Jack Kerouac grew up there, and in his novel The Town and the City he drew upon his mill-town boyhood experiences. And these days Lowell pulls in thousands  with a festival named after the book, featuring music, music, storytelling, and dozens of other cultural performances (2023 dates are April 28-29).

In Athens, Georgia, sidewalk markers help to celebrate its rich musical heritage, which dates back to the 19th century, ranging from rustic folk sounds to hip hop to futuristic pop. Plaques along the Athens Music Walk of Fame recognize artists who have contributed to the local musical scene, including some such as R.E.M. and the B-52s who have gone on to achieve national and even international, fame. In addition to that, and several great live-music venues such as the Georgia Theatre (top), there's also a music history walking tour and several annual music festivals.

Another city put on the music map by local musicians is Gainesville, Florida (339,000), including Bo Diddley (1928-2008), who lived here in his later years and played a key role in the transition from blues to rock and roll, and influenced a number of major talents such as Elvis Presley and the Beatles, and native Tom Petty, memorialized by various murals around town. Among places where music is performed are Heartwood Soundstage and Bo Diddley Plaza (above), which stages the city's largest and longest-running free outdoor concert series.

Way out on the Florida panhandle's "Redneck Riviera," another music legend in Perdido Key right up against the Alabama state line marks its 57th year, offering fantastic live performances 365 days a year since 1978. Calling itself "America's Last Great Roadhouse," the Flora-Bama Lounge, Package, and Oyster Bar is known as a honky tonk where locals mingle with tourists and millionaires with bikers at several beachfront bars. The joint has been mentioned in countless songs, books, movies, and the press, as well as lauded as the USA's number-one beach bar, among other things.

Places to hear music in Asheville, North Carolina range from a former car dealership, automotive repair shop, and shipping container complex to a 7,600-person entertainment and arts center. The birth of the sound scene was the songs and tunes imported by early Scotch-Irish settlers in the area. While local rhythms are rooted in their old-time mountain music, performances also include many other genres.

Speaking of down-home sounds, just an hour and a half north of Asheville, an Appalachian-region town called Bristol - where the Virginia-Tennessee state line runs right down the main street - bills itself as "the birthplace of country music" thanks to the recording sessions which took place here in the summer of 1927 - hailed as the "Big Bang" of country. The Birthplace of Country Music Museum lays it all out for you, with exhibits, displays, and live performances. In addition to that, there are several great live-music venues, and the Bristol Rhythm & Roots Reunion is a three-day festival held in September (in fact, this year's edition starts tomorrow!)

Bristol can also serve as starting point for following the aptly named Crooked Road: Virginia’s Heritage Music Trail, a 330-mile winding driving route through 19 counties and more than 50 towns, and covering more than 60 affiliated music venues and festivals. Along the way, visitors are introduced to sounds that have been kept alive over generations in living rooms and on porches, as well as clogging and “flat footing,” dances that often form part of the percussion for the local tunes. Whatever your musical preferences, you’re likely to find places to enjoy them away from the better known cities and stages; the crowds will be smaller - and who knows, perhaps you’ll discover the next star who will make it big.