Summer is here, and that means Sitges is in full swing for the season. Of the myriad little fishing-villages-turned-beach-resorts along Spain's Mediterranean coast, this is the one nearest and dearest to the heart of gay men and women across Europe and beyond. In Catalonia about 45 minutes south of Barcelona, Sitges (pronouced “SEAT-jess,” its fetching seaside church – pictured above -- an icon) now has a year-round population around 20,000, doesn't attract queers alone - in fact, they're greatly outnumbered by straight singles, couples, and families during the summer season. But its gay appeal reaches generations back into history that a century ago attracted the boho likes of Pablo Picasso, Joan Miró, and other arty types. From there, not unlike Cape Cod’s Provincetown, by the 70’s and 80’s it’d morphed into a resort that’s not just hetero-popular but also one of Europe’s top gay travel favorites every June-through-September. I’ve been there a bunch of times, and it truly is a blast – not to mention generally less druggy and attitudinal than Ibiza and other European gaycation spots. 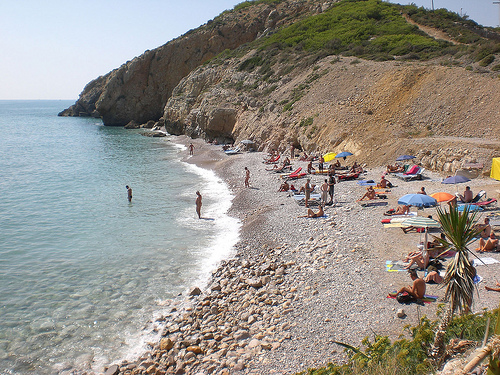 There are several nice little museums here, but the main event is of course the beach along the seafront promenade – a stretch of sand colonized by acres of rented blue chaises-longues, drinks-hawkers, and on the Bassa Rodona section hundreds of homos (mostly dudes, but also some dudettes) from all over the Continent and beyond. The other gay beach requires a bit of schlepping westward over a rocky path to a stony, secluded cove where you can be free to sun your buns and wander the cruisy paths through the nearby underbrush; it’s called Platja Home Mort (Catalan for “Dead Man’s Beach,” Playa del Hombre Muerto in Spanish; pictured at right) because every once in a while somebody who takes a shortcut – through the railway tunnel – doesn’t quite make it. Some queens will actually come and stay as much as two weeks here, and almost everybody falls into the rhythm and routine. Days at the beach and in the cafés, with an occasional excursion to places like Barcelona or Tarragona; a disco nap; dinner at lovely eateries like El Trull, Ma Maison, and El Xalet; then the nighttime-to-wee-hours circuit of myriad bars and clubs that varies according to taste but usually includes old standbys like El Candil, Mediterráneo, Bourbon’s, El 7, the delightfully sleazy El Horno, and the after-hours disco Trailer (and of course there are plenty of newer offerings, too, like Bears and XXL. You’ll find different times of summer heavier on different nationalities: Dutch, French, Italian, German, and so forth. Still not all that many North Americans, though. 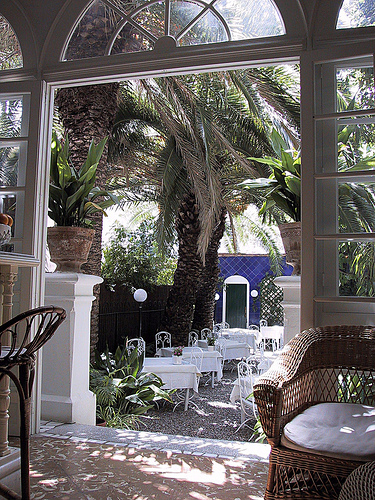 Places to bunk? Up the wazoo, of course, and pretty much all are gay-friendly – the most romantic may be the Romàntic (right), a dreamy converted Belle Époque manse which also has an annex across the street called the Renaixença (one drawback – no A/C, last I checked, but in-room fans seem to do the trick). For explicitly gay, the nearby Liberty is almost as attractive, and boasts air-conditioned rooms, while the newer Parrots,  the outgrowth of a longstanding pub of the same name, is even closer to the beach and throws in frisky perks like a basement sauna (there’s a second bath house, closer to the train station, called Sauna Sitges). I find there’s something to be said for staying slightly out of town, too – for example at the marvelous little clothing-optional gay resort Masia Casanova. This is just the tip of the icebergs of hotels and hostales; short-term apartment rentals are also common.

Wherever you end up staying, I can’t recommend this cool little town enough. Get general info from Tursime Sitges and gay-specific details from sites including GaySitges.com, GaySitgesGuide.com, GayinSitges.com, and Sitges-Gay.com.

Travel writer/editor Dave Acton is an editor of the phrasebook The Gay Translator: Love + Hookups in 7 Languages.