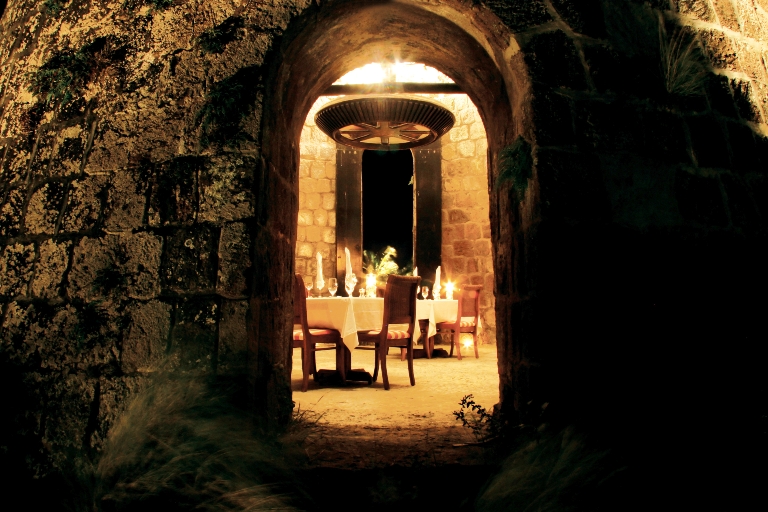 A sugar-mill dinner at Montpelier

A few years ago, the fact that an island was the birthplace of one of the USA's Founding Fathers, Alexander Hamilton, would have elicited very little excitement. But in recent years, since the advent of the hit Broadway musical Hamiliton, Nevis is all of a sudden a must-see destination.  The very first line of the musical leads you here: “How does a bastard, orphan, son of a whore and a Scotsman, dropped in the middle of a forgotten spot in the Caribbean… “ That spot would be Nevis.  But more on that later. 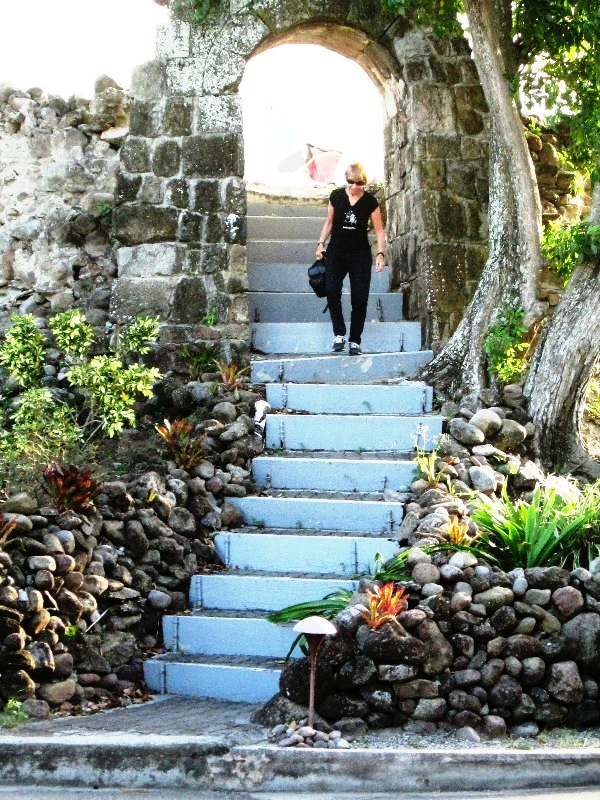 The Nisbet Plantation, the largest of the lot, has its own claim to history. Here Captain Horatio Nelson (later, Admiral and Lord), a British naval hero, met Frances Nisbet, the daughter of the plantation owner. Their wedding took place in 1787 at nearby Montpelier Plantation, also on our itinerary.  But Nisbet, where remnants of the 18th-century plantation windmill greet you upon arrival, has its own wedding tradition: if you get married on the property -- and there are very few more beautiful settings -- they plant a coconut tree with your names on it. And of course you're welcome to come back and visit any time. How's that for a marketing ploy?

Nisbet, despite its sugar-mill history, is the most modern of Nevis' plantation inns, with 36 rooms, each named after a local village, spread out over 30 acres. Its wealth of palm trees as opposed to profusions of flowers also sets it apart and it has the very real benefit of being the only plantation inn on the water. 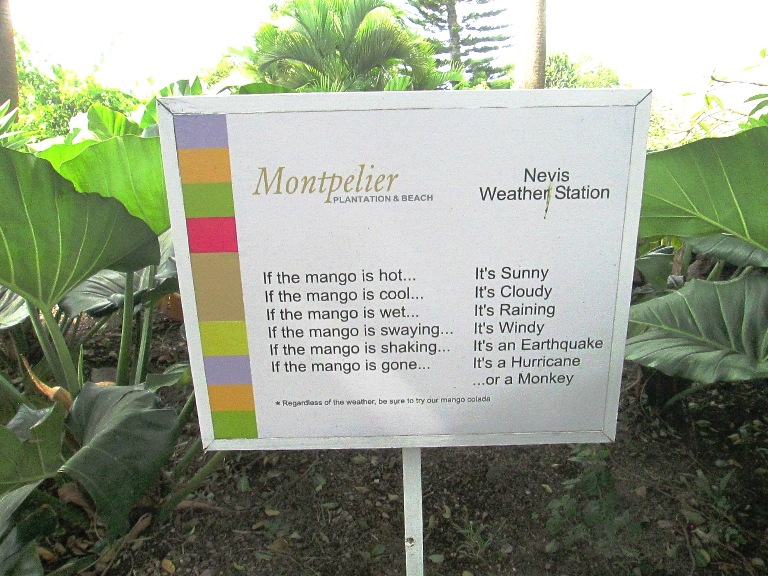 Montpelier (above and top), the site of the Nelson-Nisbet nuptials, was turned from an historic ruin into an inn in the 1960’s. And it remains the lodging of choice for the British aristocracy when visiting the island, including Princess Diana and later her son Harry. The beautifully landscaped and manicured property with profusions of color popping up everywhere mixes handsomely with the stone remnants of the sugar mill it once was. So much of the equipment is sprinkled around the grounds and enmeshed into the decor that you might not even recognize it for what it is unless you knew to look for it.

The current Great Room boasts original stonework from 300 years ago - as attested by a series of lithographs on the wall - and is where guests gather in the evening for canapés and drinks before moving on at their leisure to dinner. And what a dinner that is! Imagine dining in the only sugar mill in the world that houses a restaurant inside –- where every morsel is a history-laden, stone-studded candle-lit magical memory. 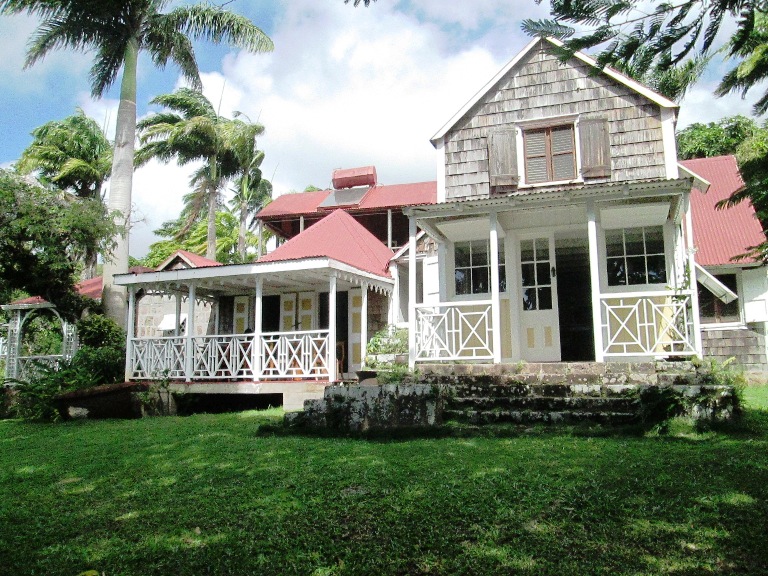 But even more history and magical edible moments await at the next sugar mill plantation/cum Inn. The Great House of the Hermitage Plantation, dating back to 1640, is said to be the oldest wooden house in the Caribbean and there is evidence that a processing mill was once below the house.  And that’s just for starters. When Richard Lupinacci bought the run-down property in 1971, he recognized the value of the original Great House –- but it was when he chose to expand his home into lodging that he became really inspired. To make room for more guests, he moved eight old wooden houses from other areas on the island where they lay in disrepair. Each cottage, lovingly restored, promotes an old island feel, an authentic lifestyle not found in other more modern settings, making the property a living architectural museum. Adding to the authenticity is an old slave privy from the 1740's sitting amidst the cottages (fortunately it is not still functional). 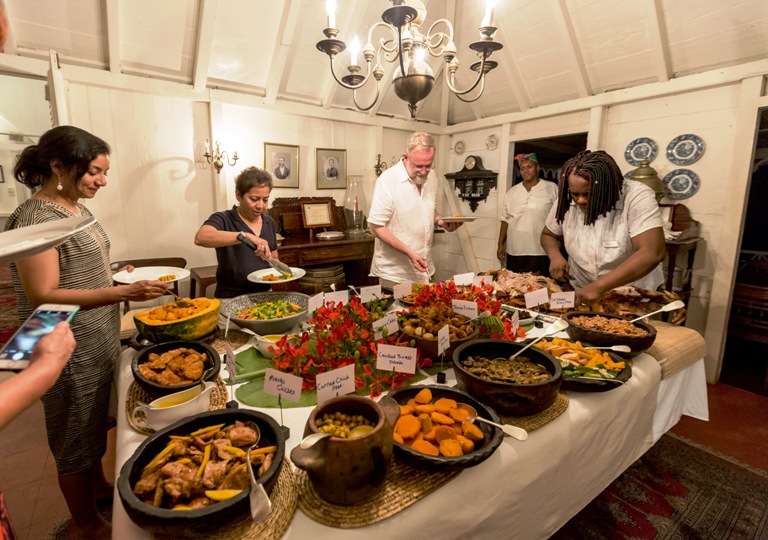 Pig roast at the Hermitage

What is still very functional is the Wednesday night pig roast -- a very big head-to-tail pig on a very large spit, to be exact. Sitting in the Great Room awaiting its theatrical entrance, I couldn't help but reconnect with the plantation owners and their guests of yore who feasted on roasted pig and its many local dishes over 300 years ago. With a special shout out to the johnny cakes, of course…

So how do you decide which connection to sugarcane history to immerse yourself in – at one of these inns? Want to be on the beach? Nisbet. Want to be surrounded by history in a cozy, intimate setting from the time you step foot on the grounds to the cottage in which you abide. The Hermitage. Want to be surrounded by profusions of color rivaling a botanical garden interwoven among the remains of a 300-year-old windmill? That’s Montpelier. 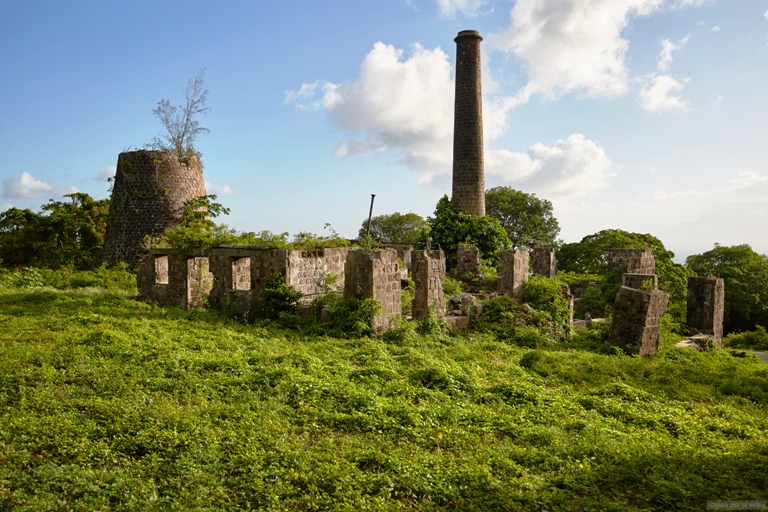 But we were talking about Hamilton, yes? He didn’t stay at any of these inns but his own family’s plantation is still on the island, and at the time was the country’s largest.  Much to the government’s chagrin, however, it hasn’t been restored. You can visit, of course, but to really connect with the renowned American -- as everyone who comes to Nevis wants to do –- a visit to Charlestown's Museum of Nevis History (below) is required. 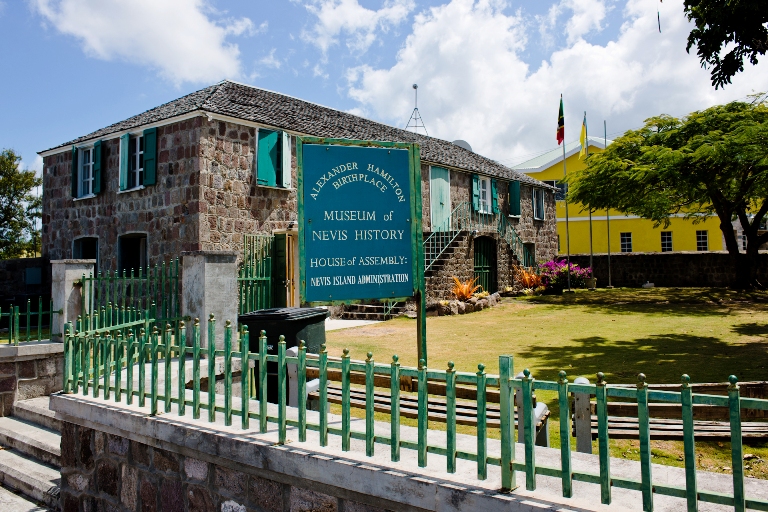 The museum is also Hamilton's birthplace, where he was born in either 1755 or 1757, depending upon whom you ask - both dates repeated to me by multiple knowledgeable sources claiming definitive information. The museum building, like so much else in Nevis, was originally built in 1680. The history and culture of Nevis is enticingly displayed but of course, the pièce de resistance is the Alexander Hamilton section, which chronicles his remarkable life, contemporaries, influences, accomplishments and impact on the history of the United States.  Which, ironically, all of us are currently reminded of today every time we reach for a $10 bill.

Because he was brought up in the islands, he brought a very different perspective to American politics than his Founding Father cronies. His early life influenced his views on racial equality (having been born across the street from a slave trade podium which horrified him at a young age), economic diversity and financial stability -- ideas that were considered very progressive in early American politics. Hamilton had more of an impact on American history and politics than most Americans realized before the advent of the Broadway play. Historical footnote:  He was our first Secretary of the Treasury, and was killed in a duel by Aaron Burr in 1804. If you have seen the show, you will fall in love with Hamilton all over again. If you've just visited the museum, you will want to buy tickets to the show -- which unfortunately, I suspect, you can't afford! A fact which I doubt Hamilton would have been pleased by. What would please him is everything else his early island home has to offer.


For more information, check out NevisIsland.com. and Tripatini posts "6 of the Top Adventures on St. Kitts and Nevis" and "Experiencing Nevis Through Artisan Dining/Small Inns."