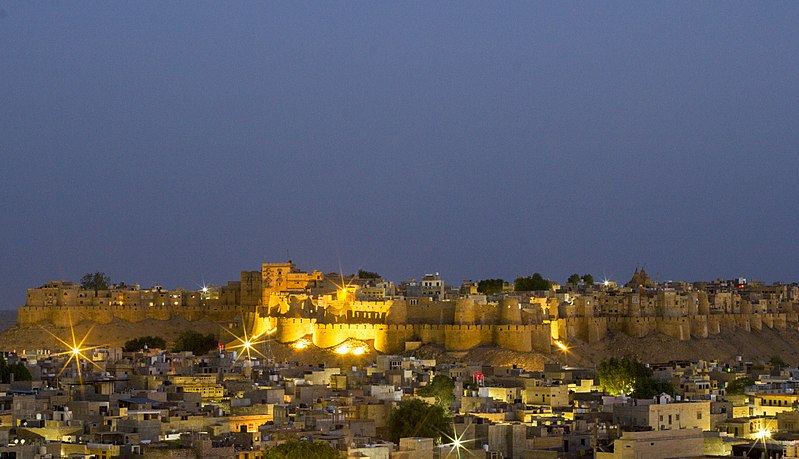 In the heart of Rajasthan state's Thar Desert, the historic city of Jaisalmer (pop. 78,000) is known as India's "Golden City" because the yellow sandstone of which its old quarter was built (mostly in the 12th century) imbuing it with a tawny lion color during the day, fading to honey-gold as the sun sets. And it's notable for its beautiful temples of the Jain religion, one of the world's oldest. But Jaisalmer's main claim to fame is Jaisalmer Fort, also known as the Sonar Quila (Golden Fort) because it's build of that same tawny  sandstone. Part of the UNESCO World Heritage Site "Hill Forts of Rajasthan," it's located on a 250-foot-high hill just 1.5 kilometers from the main railway station, and is one of the largest forts in the world, at 1,500 feet long and 750 feet wide.

Jaisalmer Fort was built atop the Trikuta Hill in 1156 AD by the Bhati Rajput clan ruler Maharawal Jaisal Singh, who also founded the city, which is named after him. Originally the city's entire population lived within its walls, and it also served as a refuge and way-station for caravans and travelers along the Silk Road.

Over the course of its long history, its fortification have stood Sonar Quila in good stead, including a 30-foot wall surrounding it, punctuated with 99 bastion and four massive gateways, while at the base there's another 15-foot wall, thus providing a double line of defense. It was the center of a number of encounters between the various clans of the regions, and also survived several attacks by Muslim rulers like Aladdin Khilji and Mughal Emperor Humayun (though it did ended up being controlled by the Mughals from the mid-16th to mid-18th century).

The marvelous and awe-inspiring architecture is a seamless blend of Rajput and Islamic styles, with myriad enthralling carvings and sculptures found among palaces, temples (including the Laksmni Hindy temple and seven of the aforementioned Jain temples, above), havelis (elaborate merchant houses), and other buildings set along narrow winding pathways which interlock several parts of the fort. And even today, almost one-quarter of the city's population lives inside these walls, served by wells, draining systems, and other utilities, and these days many run restaurants, hostelries, and shops catering to visitors.

One of the main attractions for visitors is the Raj Mahal Palace, known for its elaborate marble throne and displays of antique arms, clothing, utensils, and ornaments of the Rajput kingdom. Parallel to it is the five-story Tazia tower, constructed by Muslim craftsmen and adorned with Bengali style roofs. The palace is open daily from 9 am to 6 pm, and the entry fee is 50 rupees for Indians and 250 for foreigners, with an additional 50 to take photos.

To make the most of your stay in this city, also visit the Jaisalmer desert camp.