I’m in Cairo on a hotel balcony overlooking the Nile River, a fantasy destination I’ve heard about my whole life - and at long last I’m here. I needed to take a minute and revel in that. And recognize that thanks to Overseas Adventure Travel’s (OAT) "Ancient Egypt and the Nile River Tour" I was about to begin a magical journey through 6,000 years of history. And then accept the hard truth. How do you capture 6,000 years of history in 1,200 words, the limit that many travel editors now impose on their writers? Usually my articles weave a story; this one’s not going to. I think all I can do is let you experience a little bit of Egypt the way I did.

My first introduction – to the Egyptian Museum - is astounding, and hints at the iconic sites yet to come with their incredible stories and fascinating whose importance to Egyptians as well as visitors from around the world. More than 150,000 artifacts tell the entire six-millennia saga -- so many stories, sculptures, papyri, sarcophagi, and more. Ironically, the one I remember most is that of the Pharaoh Khufu (aka Cheops) who built the Great Pyramid, the largest stone structure in the world - but this commemorative statue (above) is only three inches high. I couldn’t help but feel he wouldn’t be very happy about that.

But ah, the pièce de résistance – is all about King Tut – Tutankhamun, who ruled from the age of nine to 19 (1332-1323 BCE) and is today probably its best known ruler (apologies to Ramses II, actually ancient Egypt's most influential ruler, but more on him later), only because his tomb was the only one ever to be found intact when it was discovered in 1922; because all the others had long been subjected to robbery and desecration (more on that later, too), the boy king's tomb is considered the most spectacular discovery in the history of archaeology. His mummy here (above) lays in quiet repose – not really surprising for a mummy, many others of which we saw in the new Grand Egyptian Museum, the world's largest of archaeology. Egyptians sought to preserve the bodies of the dead so that the soul could inhabit them for eternity. Six thousand years may not be eternity, but it ain't beanbag. Among the artifacts of the boy king - numbering about 5,000 - are gold coffins, furnishings, gold jewelry of all sorts adorning fingers and toes, elaborate necklaces and headpieces. And here I thought my 13-year-old grandson was spoiled.

And now it's time to move beyond museum remnants to the actual tombs, crypts, statues, and pyramids which beggar belief. Furthermore,  although excavation of these ancient sites began in the early 1800’s, they still continue to this day with new archaeological discoveries being made all over Egypt. In fact, just several months ago in Sakkara (also spelled Saqqara), a sprawling complex of temples, pyramids, and crypts amid miles upon square miles of monochromatic monotony and located just a half-hour's drive from Cairo a "dream discovery" was made of the sarcophagus of the treasurer of the great Ramses II. The largest and best known of Sakkara's many tombs is the step pyramid of King Djoser - the first ever to be built, in 2650 BCE, and counted as the oldest extant stone structure in the world.

Speaking of Ramses II, the 3,200-year-old recumbent statue of him in Memphis, just five minutes up the road from Sakkara, is of an intimidating size  - about 36 feet tall - and that’s without his legs. The remnants of Egyptian antiquity are often big -  overwhelming even - and powerful as well as being very old. And Ramses the Great, of all the pharaohs the longest reigning (67 years), most influential, most prolific builders of temples, served for 67 years (even more impressive, though, I thought, were his 55 wives and 115 children).

Then there's the legendary Valley of the Kings, located outside Luxor (an eight-hour drive or 3½-hour flight south of Cairo) literally takes you deeper into the tombs of the most famous of Egypt’s rulers and aristocrats - 63 in all - built from the 16th through 11th centuries BCE.  So, no surprise, eventually the original tombs were ransacked. Stressed-out pharaohs later decided to build their own tombs in this protected area where the new tombs were chiseled deep into the sides of desolate cliffs on the Nile’s west bank.

Success followed, and because they’ve been sealed for so long – Tutankhamun’s tomb was discovered here – the walls have retained colors so vibrant as to look freshly painted and deeply etched carvings depicted in hieroglyphic symbols describing the journey to the afterlife still visible as if recently crafted. Fortunately, our guide, Hussien, speaks fluent hieroglyphics and could read the walls like a storybook. Thus we learned of the royal lives of the kings and everyday lives of the villagers from 5,000 years ago – and our country boasts of the historic lives of the colonists who lived 250 years ago in Williamsburg.  Perspective, anyone? 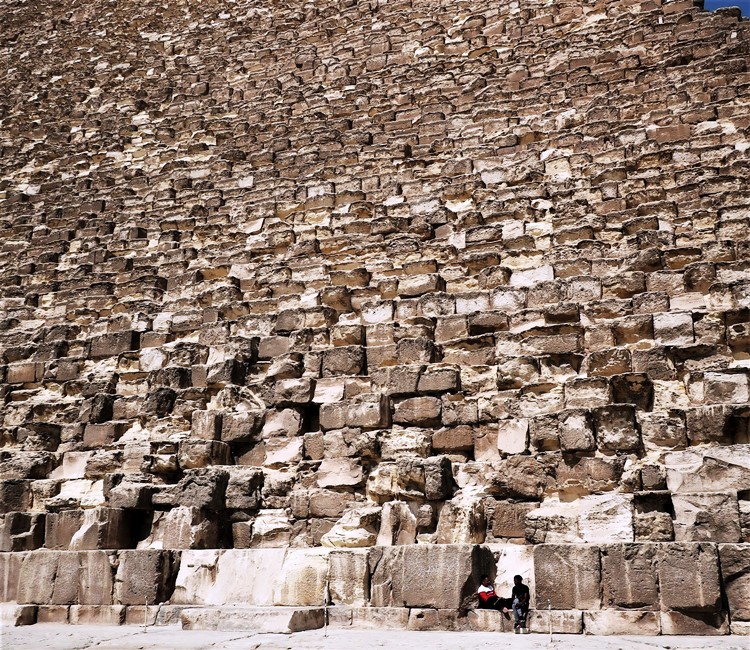 
Pyramid -  an elusive image. Concept. Visual. Always a fanciful figment from far away and so long ago – but nothing I could personally relate to. Until now, when I was actually standing on one of the huge boulders of which it was made.  The fact that it was even made of huge boulders seemingly randomly thrown together was nothing I could have imagined before. Mountains moved and reshaped to the ego of one person, depleting the physical and economic resources of the current city to ensure the pharaoh’s safe journey into his next along with all the accoutrements – jewelry, foodstuffs, furniture, chariots, weapons – he (or in several cases she, such as the famous Nefertiti) has acquired.

And of course the 63-quare-mile Pyramids of Giza complex right outside Cairo pretty much define ancient Egypt. No matter what else you see - all of which will be astounding - this probably will be where’s your mind’s eye returns whenever you look back on the trip. The Great Pyramid, at 480 feet tall and built more than 4,500 years ago, is the last of the Seven Ancient Wonders of the World to still stand. Again, the colors embedded in the greater than life-size paintings of male figures seemingly shine. I could literally see each of the two to three million huge boulders placed round the clock over a 20-year span and could imagine the 10,000 workers sweating and panting from strain to create this monstrous edifice in honor of the pharaoh Khufu. Did I mention the stones were brought in from limestone quarries 20 miles away?

From afar, the surface of the pyramid looks smooth. As you get closer, you can see the enormity of each stone, several feet in diameter, randomly placed beside and atop the other. As I climbed newly embedded stairs onto the pyramid itself, I wondered if Khufu would take offense.

There are two other pyramids of note – of the 124 that once occupied this plateau – but the Great Pyramid is what dazzled me. I might add that to gaze upon them from atop a camel added a whole new level of authenticity not usually associated with standard sightseeing options.

I was pretty sure I wasn’t going to be impressed by the size of anything else any time soon. And then we came to the Sphinx, also part of Giza -- the inscrutable and mysterious Sphinx, equally as old, carved from almost a single piece of limestone, seemingly part of the mountain itself. The head of a man and the body of a lion represent the combination of intelligence and strength attributed to the pharaohs. “Take some time to revel in the history embedded in every block of stone and the incomprehensible size of each structure standing tall in the desert sand,” advised our guide Hussien.

And that's the "Cliff Notes"-edition of my Egyptian tour, though it also took a deeper dive into other famous temple complexes as well as a much-deserved emphasis on Egyptian lifestyle and culture. I suspect this itinerary is similar to that of other tour groups but that’s where the comparison ends. OAT is totally unlike other tour groups, which will be the subject of my next article. To see this itinerary in detail, click here.