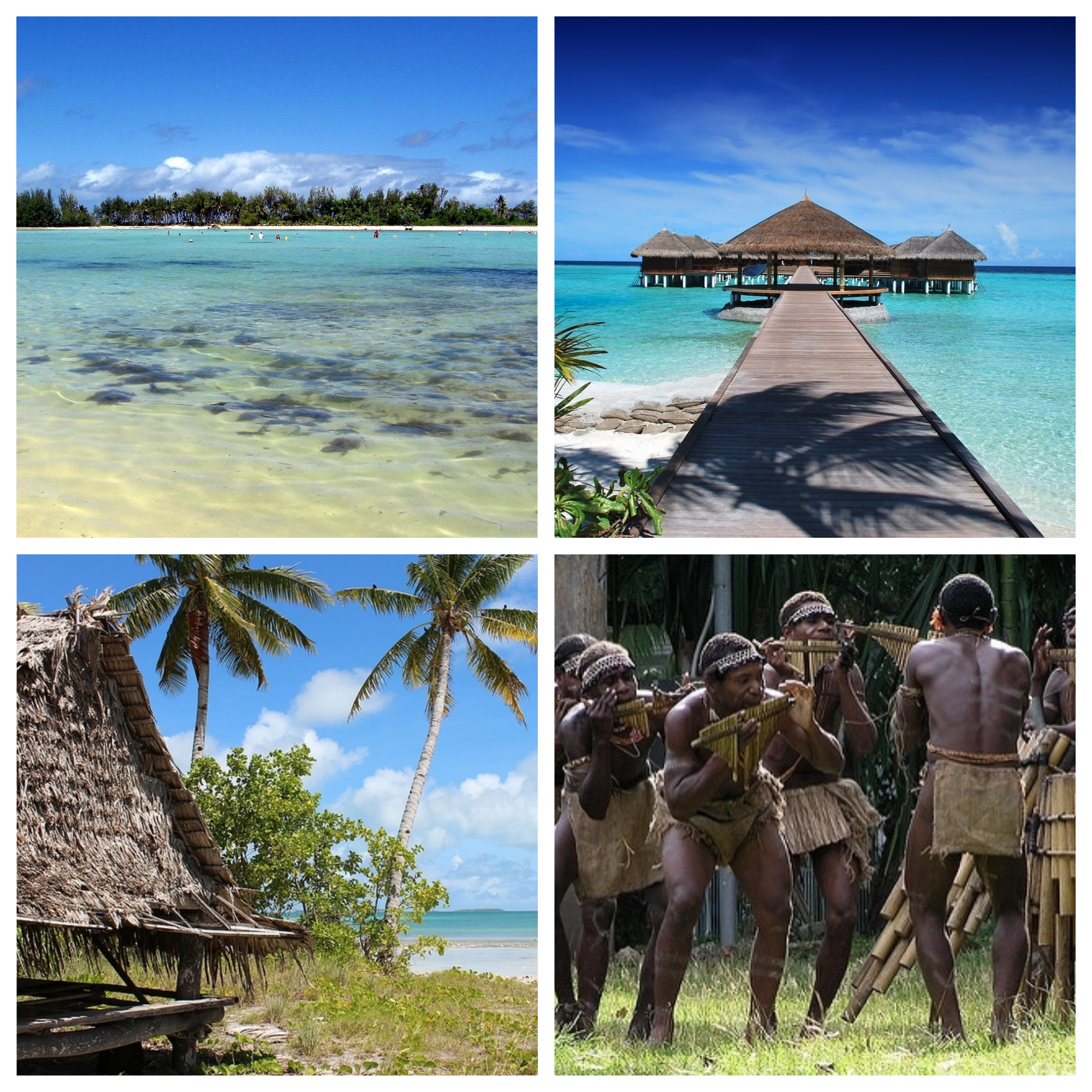 
In the travel media business, the end of the old year is usually accompanied by articles on where to travel in the new year. But if you’re casting about for off-the-beaten-track ideas, you could do worse that starting to experience the delightful tropical islands of the world that will be the first, in the not distant future, to be threatened by the sea-level rise brought by climate change. expected to be 10 to 32 inches (26-82 centimeters) by the end of this century. Of course, much of the rest of the world’s coastlines will be also affected, but sadly, these particularly low-lying isles in the Pacific and Indian Oceans will likely be among the first to drastically change and perhaps even disappear. Here are eight of the most worthwhile:

Fifteen South-Pacific islands – a mix of volcanic islands in the north and atolls in the south – the Cooks (yes, named after famed explorer Captain James Cook) have a population of just over 17,000, spread across a whopping 690,000 square miles (1.8 million sq. kilometers)  northeast of New Zealand (a seven-hour flight away; it’s 9½ from Los Angeles), with which they’re politically bound though self-governing. In addition to being a rather notorious offshore tax haven, they’ve developed a robust tourism industry – attracting more than 100,000 annually, especially New Zealanders and Australians – thanks to a mix of fairly sophisticated modern scene in capital Rarotonga (pop. 13,000) and paradisiacal tropical jungles, beaches, and turquoise waters fantastic for diving/snorkeling. There’s also a thriving Maori culture (for example, sample home brew at a traditional bush-beer drinking club!) and ancient temples and markets to discover out on the islands, and cool experiences like swim in the underground cave pools of Mitiaro and Ma’uke.

Ocean acidification and changes in currents have created increasing pressure on the islands’ fishermen, rainfall has fallen, and tropical storms have increased in number and severity. And as low-lying atolls, the Cooks’ southern islands are particularly vulnerable to sea-level rise. In 1997, almost half the population of the island of Manihiki was relocated to Raratonga and then to New Zealand due to increasing storm surges and coastal flooding. Will relocation and other climate-change adaptation measures being put into effect be enough? Sadly, still a an open question.

A chain of 33 atolls spread over 3.5 million square kilometres (1.3 million square miles). halfway between Hawaii and Australia, Kiribati has a population of around 114,000. Highlights include Kirimati Island’s world-class fishing (both game and bone fishing) and the western Gilbert Group, which offer amazing and unique cultural experiences. Snorkeling its limpid waters is popular, as is birding, while diving, surfing, and kite surfing are catching on in a big way. The main atoll, Kiritimati (Christmas Island) is the world’s largest, and the country’s capital Tarawa has historic sites and artefacts where the Battle of Tarawa, one of World War II’s bloodiest, was fought. Accommodations tend toward the comfortable but rustic.

On the climate-change front, the islands’ average height is just over 6½ feet (two meters), and one village has already had to be moved, many citizens have already relocated to the island of Tarawam, and the government is actually in negotiations to relocate all of its citizens to Fiji. In the meantime, a raft of environmental-adaptation measures are being rolled out to help Kiribatians cope.

A mostly pristine, 26-atoll chain of some 1,200 islands spread across 115 square miles (298 sq. kilometers) southwest of India and Sri Lanka, with a population of 417,000, the Maldives have become a bastion of luxury tourism, as well as home to a capital, Malé (pop. 154,000) which is one of the world’s most densely populated cities. Its beaches are among the world’s most stunning, and various resorts – from mid-range to extremely high end – each have its own private island (affordable independent travel which allows more access to the locals is also doable via public ferries). And on/under the water, the diving/snorkeling is some of the world’s most spectacular, and amazing experiences include swimming with whale sharks.

Unfortunately, the country is also facing increasing bleaching and shrinkage of its magnificent coral reefs, and has become another of the “front lines” of the growing climate-change crisis. The government’s current strategy is to use the revenue from renting out islands to the resorts and others, and using the proceeds to reclaim, fortify and even build up to 11 new islands such as Hulhumale, where a City of Hope is slated to accommodate some 130,000 Maldivians by 2023.

Especially known as a world-class diving paradise, this group of 340 Micronesian islands in the west Pacific is a three-hour flight east from the Philippines as well as north from Indonesia. With a population of just 22,000 or so, Palau also offers fantastic adventure and ecotourism offerings, remnants of World-War-II Pacific-Theater battles, and even some good museums and an aquarium in its largest town, Koror (pop. 10,000). In addition to fantastic offshore reefs, wrecks, and mazelike landscapes, another unique diving/snorkeling attraction is Eil Malk island’s Jellyfish Lake, where visitors experience the wonder of snorkeling amid millions of (stingless) golden jellyfish

Coral bleaching is also a major crisis here, and ever rising high tides now regularly flood coastal areas, and the government is working to eventually move much of the population up into the highlands, less fertile though they are, and in the meantime has put in place measures to safeguard marine resources and halt coastal dredging as well as destruction of protective mangroves.

With a population of just over 94,000, this group of 115 islands in the Indian Ocean just over 2,300 miles (3,730 km) off Africa’s east coast, the Seychelles have everything visitors could ask for in a tropical paradise, and they’re particularly popular with honeymooners. First and foremost, of course, come their exquisite beaches, most famously Anse Source d'Argent, Anse Marron, Anse Takamaka, and Anse Lazio. Diving and snorkeling are not far behind, with not just splendid reefs but canyon-like terrain, exciting shipwrecks, impressive granite outcrops, and lovely coral gardens. And ecotourism options abound, from sea-turtle watching to impressive birding to Edenic refuges like Praslin island’s Vallée de Mai. Attractions in capital Victoria (pop. 27,000) include a botanical garden, street markets, and charming 19th-century architecture/landmarks. And Seychelles accommodations include not just luxury resorts but quaint guesthouses and self-catering rentals.

Reef die-offs as well as droughts and coastal erosion and flooding have in recent years hit the Seychelles hard, as well. Among the measures being taken are reef rehabilitation, renewable energy, climate-smart agricultural practices, and long-term contingency plans to relocate to higher, if less hospitable ground.

This half dozen major islands (the largest and best known of which is Guadalcanal) and 992 smaller islands spread across 11,000 sq. mi. (28,400 sq. km) in the western Pacific off Papua New Guinea has a population around 900,000. It’s quite untouristy and less developed and a bit harder to get to than most of the other island destinations I’ve covered here, but can be well worth the effort. Outside capital Honiara (pop. 85,000) you’ll find the usual idyllic beaches, world-class surfing, adventure/ecotourism offerings, and World-War-II sites (including a Guadalcanal American Memorial and a war-relics museum based in a local home). But of special interest here is also a chance to see the traditional Melanesian island culture in rural villages, in its crafts, and archaeological sites including ancient skull shrines. Jungle hiking is fascinating, and diving is superb, with an abundance of reefs, walls, caves, and wrecks.

These days, at high tide the islands sit barely above the waterline, and the situation will only grow worse as sea levels rise further. The island of Tauba was first completely submerged during a hide tide more than a decade ago, and many of them and other Solomon Islanders have been relocating to higher ground on other islands (five other islands have since disappeared completely, and a half dozen more are currently eroding). In addition to relocation plans, agricultural-reform, sustainable-development, and renewable-energy projects are being put in place.

Want something even more rustic than the Solomons? With just nine islands in the South Pacific a 2½-hour flight north of Fiji, Tuvalu is one of the world’s most remote countries as well as its second smallest (pop. just 9,500). The Funafuti atoll is home to half its population along with its capital Fongafale. With little tourism, it’s very much a laid-back, idyllic South-Seas destination with a traditional Polynesian culture, as well as palmy beaches, excellent diving/snorkeling, and its share of World-War-II sites including plane wrecks, airstrips, and bunkers. If you’re a stamp enthusiast, this is actually one of Tuvalu’s strongest suits, and a visit to its Philatelic Bureau is very much in order to pick up some colorful mementos. Accommodation is small-scale, mostly several dozen guesthouses, small hotels, and lodges, and there are very few shops and no ATMs.

With an average height of just 6 ½ feet (two meters) above the Pacific, Tuvalu is particularly vulnerable to sea-level rise, and in addition to water conservation techniques, the usual mix of internal relocation, renewable energy, agriculture reforms, and other measures are being developed (see more in video below).

Once known as the New Hebrides, these 83 South Pacific islands spanning 4,700 sq. mi. (12,200 sq. km) east of Australia are home to some 272,000 Melanesians. Just over three hours by air from Sydney, the charming little capital Port Vila (pop. 44,000) naturally is home to much of Vanuatu’s lodging, dining, and shopping, but the real charm lies out on the nearby islands, including castaway beaches; fabulous fishing; snorkeling/diving (great caves and tunnels, plus the world’s biggest wreck dive!); wicked surfing; village culture (including cargo cults and traditional “bungee” jumping, with vines!); ziplining; hot springs; gorgeous Mele Waterfalls; and Mount Yasur volcano, where you can see fiery lava, then “surf” back down the volcanic gravel.

In 2015, Vanuatu was slammed by Cyclone Pam, whose ferocity was hyperchanged by climate change, and sea level has been rising in the last couple of decades at a rate significantly higher than the world average. Rises in temperatures, the intensity of rainfall and cyclones, and ocean acidification are predicted, and the usual raft of climate-change adaptation measures is being instituted by the local authorities with the assistance of others such as Australia and international NGOs.


Videos About the Effects of Climate Change in Kiribati and Tuvalu: