Patna, the place which carries a rich and wild history of India, was earlier known as Patliputra. The city, which was the capital of the mighty Magadha Empire, has been here for 2500 years, loaded with interesting stories of warriors and kingdoms. This was the place where many scholars, such as Aryabhatta, Chanakya, and Panini used to live and share their learnings. This is the place where Buddhism and Jainism religions originated and flourished.

If you are from Delhi, you can book a Delhi to Patna flight to reach here, and for accommodation, there is a wide range of budget-friendly to expensive hotels in Patna. This city is filled with warm-hearted people that are always ready to greet visitors who come to the city to enjoy their time.  So, in this blog, we will be looking at some of the best places to visit in Patna. Let’s begin.

Bihar museum is the place where history lovers or visitors who are curious about the state can visit this museum. The museum provides an understanding of the ancient history and culture of Bihar. It is filled with exceptional archeological and anthropological artifacts that date back from the centuries-old Patna museum. The museum is built into sections that include galleries, educational and administrative areas. The galleries in the Bihar museum include the orientation gallery, the children's gallery, the regional gallery, the contemporary gallery, the historical art galleries, the Bihari Diaspora gallery, and the visible storage gallery. The exhibits on different subjects are displayed in separate galleries. Each gallery is humongous and many artifacts are on display in each one of them. They also include artifacts that date back to the 4th century.

The park is situated near the Patna junction, opposite the Mahavir mandir. Also known as the Buddha Memorial Park, it is spread across an area of 22 acres. The Buddha Smriti Park was constructed by the Government of Bihar to mark the 2554th birthday of Lord Buddha. The features of the park include the two Bodhi trees planted by the Dalai Lama and the Lord Buddha statue. It is a multi-purpose park where the patnites, as well as the visitors from other cities, come to enjoy with their family, friends or partners. The park has a meditation center, library with multiple books on Buddhism, and a museum as well. The place has such an ambient atmosphere that it can make one sit for a whole day! So it should be on your top list if visiting Patna city.

Mahavir Mandir is a temple dedicated to Lord Hanuman. It is one of the most famous temples in India. The temple was constructed in the 17th century. It got its recognition after India’s partition in 1947 when a huge number of Hindu refugees began to settle down in the city from the newly created Pakistan. It is the temple where a large number of devotees come to worship as well as enjoy the tranquil environment of the temple. Also, apart from the captivating idol of Lord Hanuman, it also hosts the famous “floating stone” from the ancient Ram Setu. 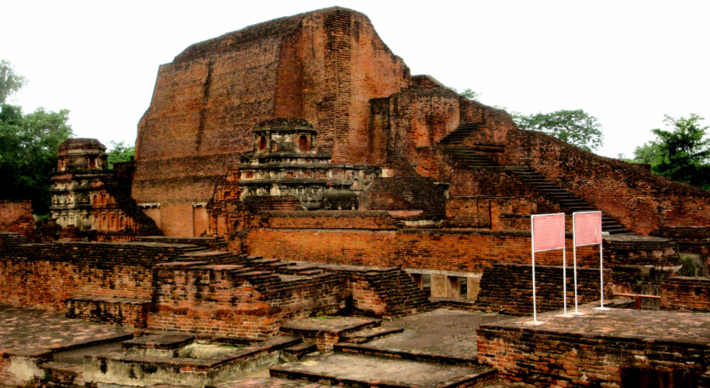 A UNESCO world heritage site, Nalanda was the epicenter of learning in ancient India. It was one of the earliest universities in India, with students not just from India, but China, Tibet, Korea, and central Asia. The time when Nalanda prospered the most was between the 5th century AD to 1200 AD. It is believed that there was a humongous library in Nalanda which was set on fire by the invaders, and it burnt continuously for around 6 months. Nalanda, the great educational and monastic institution have got various ruins of stupas, viharas, and shrines. The place also showcases an archaeological museum right next to the ruins, which has exhibitions of the Nalanda university’s seal, bronze, and stone sculptures. Situated about 95 km from Patna, It would be an unforgettable experience for visitors who would be visiting this place!