Whenever I’m away from home, I often take a view from our hotel room, for social media. At Agra, I opened the curtains to behold … the golden arches of McDonalds.

Not that I really have anything against McD’s; I sometimes eat there, but it’s certainly not my eatery of choice. It’s just that their golden arches seem to intrude on beautiful scenery or architecture all over the world (except in a limited number of places such as the part of Germany we visited earlier this year, where they had to keep their logo small and unobtrusive, and not interfere with the exterior fabric of the building).

Dilip, our guide, couldn’t understand why McDonald’s came to India at all; Hindus don’t eat beef for religious reasons, and just won’t eat pork - in fact, he said, a good percentage of Hindus are vegetarian. Maybe it’s there for the tourists, of which Agra sees many, or maybe local people like to pop in for a coffee, and take advantage of the free WiFi.

In Delhi we saw the Red Fort - or rather, just had a fleeting glimpse out of the window of the coach. But, that didn’t matter; it was based on - maybe even copied from - the fort at Agra. Responsible for both was our friend, the 17jth-century Mughal emperor Shah Jahan, who had his capital here. It was both defensive work and palace, built of red sandstone on the inside, and white marble on the inside. It’s sometimes called the Red Fort, but I refrained from doing so, to avoid confusion with the Red Fort at Delhi and because anyone seeing my photographs, mainly of the interior, might say, ‘It doesn’t look very red!’

Gardens, reception halls, courtyards - you could spend three or four days exploring these. But from one of the courtyards you can look out, take in the surrounding scenery, then, across the River Yamuna, behold Shah Jahan’s most famous legacy: the Taj Mahal. The gateway to the Taj is some distance from the mausoleum itself. I drew a parallel with Stonehenge, where if you don’t want to walk a fair distance to the stones from the visitor centre, there’s a bus. There used to be land trains, which proved woefully inadequate for the number of visitors, so they were replaced by buses - which were in turn replaced by bigger buses.

At the Taj Mahal, they use - tuk-tuks: 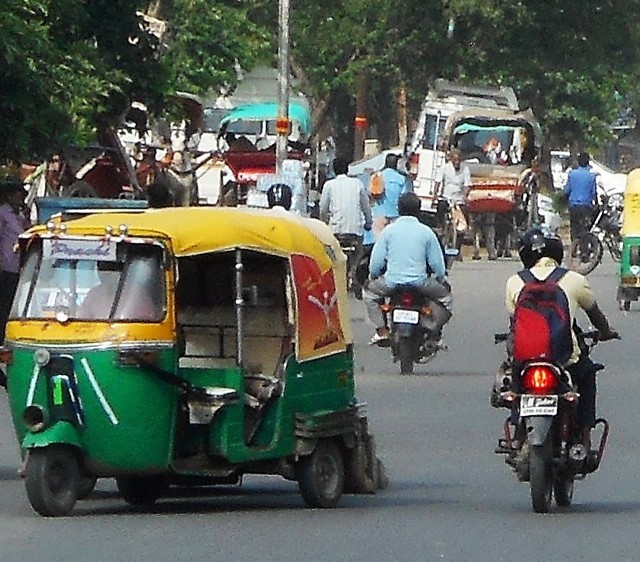 Tuk-tuks or variations of them can be seen almost all over Asia, and sometimes in Mediterranean countries as well. They’re basically open, passenger-carrying bodies based around the engine and working parts of a motor scooter. They will seat six - but, as we’ve already seen, in India, the passenger capacity of any surface vehicle is by no means judged by the number of seats available (we’ve seen motor bikes carrying a family of four, plus the baby!).

I’d rather have walked - but we just had to ride a tuk-tuk for the experience. Fortunately, things were arranged so that we all got a seat, rather than have to cling to the framework.

‘A teardrop on the cheek of eternity’ (Rabinanath Tagore)

‘It is the embodiment of all things pure’ (Rudyard Kipling)

Look at any book, or even advertisements offering trips to India, they’ll almost always contain a picture of the Taj Mahal (though if you try searching it online without the qualifier "Agra", you’ll probably be greeted with Indian restaurants all over the world with that name before you come across any reference to the building itself. But familiar as the image of the building is, you have to go there to get a true sense of its grandeur. It was built at the orders of Shah Jahan, who, when his beloved wife Mumtaz Mahal died in childbirth in 1631, decreed that this vast mausoleum be built in her memory. It’s absolutely symmetrical, so it looks the same from whichever angle you photograph it.

Even Shah Jahan was overwhelmed: ‘It makes the sun and the moon shed tears from their eyes’  he wrote.

There is no truth in the tale that he had the workers blinded, or chopped their hands off, so they couldn’t produce another work like it. There were an estimated 20,000 of them, for one thing, and another was that he planned an identical mausoleum for himself on the opposite bank of the Yamuna River. However, just after the foundations were laid, Shah Jahan became ill, and his sons declared him incompetent to rule, and placed him under house arrest in the Agra Fort. So the plan never came to fruition, and Shah Jahan’s body lies next to that of Mumtaz. But the foundations remain, and provide an excellent vantage for photographing the Taj at sunrise.

Of course, it’s crowded … that’s only to be expected, for many people regard it as a place of pilgrimage, rather than just a ‘sight to see’. The graves themselves aren’t open to the public, but the cenotaphs above them are. Although photography isn’t allowed there; our guide warned us, "you will see people taking pictures, but they’re Indians, and don’t mind getting whacked by the policemen". Not that we saw any whacking, but the policemen had powerful whistles, and offenders did get a severe whistling-at!

Our guide had arranged for a professional photographer to attend our group - everyone wants to be photographed by the Taj Mahal (even Princess Diana, although, unlike her, we didn’t have the place to ourselves!).