Uzbekistan – cultural treasure of the East 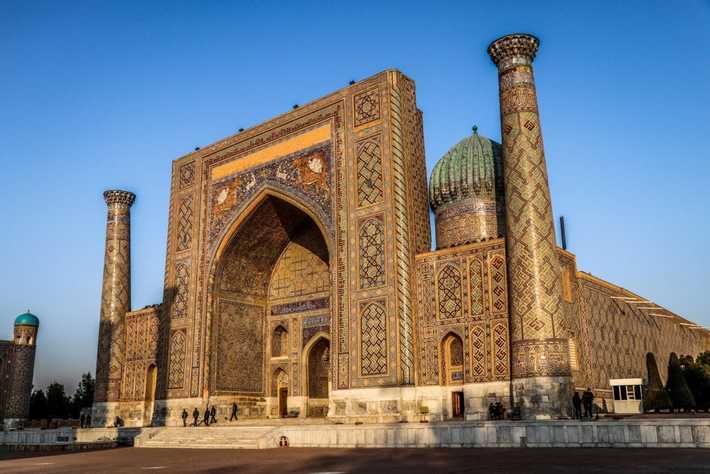 In the very heart of Asia, at the crossroads of the trade routes of the Great Silk Road, the many-sided and charming Uzbekistan stretches. The history of Uzbekistan has its roots in the distant past. The first states on its territory appeared as early as VIII — VII centuries BC. Cloaked in myths and legends, it year after year attracts travelers from all over the world to share its secrets and allow to touch the greatest monuments of antiquity.

Uzbekistan is a state with an outstanding cultural heritage, diverse types of art and traditional crafts, the mentality of the people, its folklore and cuisine. This truly fabulous country gets to fall in love with itself.

When you visit Uzbekistan, you have a unique opportunity to experience the ancient history of this region, to visit the roads of the Great Silk Road, on those roads on which the battle took place and the history itself was going on. You can really touch the historical landmarks in the face of historical monuments, which are a treasure that has come down to us from our ancestors through many centuries. There is a huge number of travelers from different countries of the world who are fans of the historical cities of Uzbekistan. Such major cities of Uzbekistan as Samarkand, Bukhara, Khiva and Tashkent attract millions of eyes with their rich history: luxurious buildings of the Khans and Shakhs of different periods, picturesque minarets, colorful domes that rise majestically upwards. This list can go on endlessly.

To solve the riddle of the eastern soul, interwoven like suzane in the endless depths of the universe, you can visit one of the many folklore festivals or look for a leisurely tea in a local teahouse. The spirit of the centuries permeates this fabulous land, which lives by its own laws. Its echo can be heard in the domes of mosques, in the azure majolica of minarets in the ruins of ancient fire sites of the worshipers. Everything here is filled with deep meaning and is subject to centuries-old traditions, carefully shielded by the Uzbek people, famous for invariable hospitality and inventors and inventors. This is also reflected in the art of cooking - bright and diverse national cuisine will delight real gourmets - juicy, fragrant fruits of sweet-smelling southern gardens, crispy samsa (pies) and more than seventy varieties of Uzbek pilaf will not leave anyone unresponsive! This amazing land fascinates with its historical value, but this is not the only thing that is so beautiful in this country. One should just look at the picturesque nature: the smooth outlines of mountains, clear and noisy rivers, the bright and fresh greens of the valleys and clear blue lakes, breathe in the fresh air of the mountains, and just enjoying the warmth, bask in the rays of the bright sun - and you will be captivated forever.In short, this amazing country will not leave impassive any guest who has visited her.

The most favorable time for Uzbekistan tours is spring (April-May) and autumn (September-November), since it is too hot in summer, especially in July, and in winter it is cool and there is a lot of rain. The best time to visit the mountainous areas is from March to November, because the air in the mountains is not as hot as on the plains. The ski season lasts from November to April.