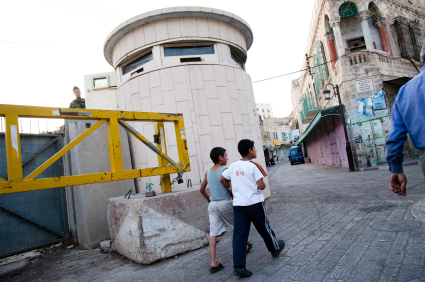 Back in 2004, I worked as a tour guide in Palestine (that shot at right is of Hebron, on the West Bank). My clients were, for the main part, politically engaged people of diverse backgrounds, mainly from Europe and the USA, who had been involved with Palestinian solidarity campaigning back home and wanted to see the situation for themselves.

Just a year before, Rachel Corrie had been crushed to death by an Israeli military bulldozer, and Tom Hurndall had been shot by an Israeli sniper, dying six months later. Both were volunteers with the International Solidarity Movement, an activist organisation which brought people from around the world to act as human rights observers.

Although Rachel and Tom were both consciously carrying out dangerous tasks, their killings - and the deportations of other ISM activists – posed questions for me and for the tourists I was guiding. How would we gauge our own safety? What were our own responsibilities vis-a-vis what we witnessed? How should 'solidarity tourists' approach calls to come to demonstrations which could lead to them being arrested or injured? Where was the fine dividing line between gawping at the conflict, perhaps getting an adrenaline shudder at the proximity to checkpoints and soldiers, and genuinely broadening one's knowledge and understanding?

The Alternative Tourism Group (ATG), one of the Palestinian tour operators I worked with in the West Bank, has recently been involved in “The Palestinian Initiative for Responsible Tourism,' a project bringing together various tour companies and volunteer organisations working with internationals.

As ATG's Jawad Musleh explains, the initiative started with a meeting in Alexandria in 2006 “where some international organisations discussed the possibilities of developing responsible tourism in Palestine, and how to affect tourism there in general. We wanted to make it pay more attention to the interests of the people, so that tourists don't just look at the holy places and then leave without finding out more about the situation.”

The Code of Conduct for Tourism in the Holy Land which resulted from that meeting includes guidance for both visitors and tour operators. As well as universally applicable advice on respecting the environment, buying local produce and dressing appropriately, the Code includes suggestions specific to a conflict zone. This includes advising tourists to make contact with Palestinian organisations in advance to better understand the safety environment they will be in, warning that “short-sighted emotional responses, such as giving money out of compassion” can backfire, and “remembering that the people you encounter have lived under military occupation for many years. Be sensitive when discussing related topics and listen to their points of view.” Tourism professionals are urged to counter stereotypes and adopt fair trade principles when they market local craft products.

As tourism in conflict-affected areas goes, Palestine is unusual. The region's political significance ensures a steady supply of solidarity tourists, while its religious and historical importance attracts pilgrims and travelers who are neutral or curious. Although tourists' fears for their safety have reduced the numbers of conventional travelers, a healthy 'alternative' tourism industry has grown, with a considered strategy for educating visitors about life under military occupation.

In Belfast, too, some tourist businesses have grown up around the legacy of the decades of sectarian violence. The famous political murals painted by both sides have become a visitor attraction – albeit one which the Northern Ireland tourist board would like to replace with less 'divisive' images. Taxi drivers advertise their expert knowledge of the conflict as a way to introduce tourists to the reality behind the myths. In Afghanistan, Mountain Unity is developing ethical tourism in the Wakhan Corridor as a means to generate revenue for local communities and introduce intrepid travelers to the country. And most recently, a press release dropped into my inbox from Regent Holidays, offering trips to the little-known enclave of Ngorno-Karabakh, in the late 80s the scene of a bloody conflict between Armenia and Azerbaijan.

But for Pakistan, for example, rising conflict has severely damaged tourism. According to Asghar Ali Porik of Rawalpindi-based Jasmine Tours, "since NATO and the Americans started the War on Terror, tourism to Pakistan has dropped 50%. The worst-hit sector has been cultural tourism and sightseeing, because people are afraid for their security." Minority interests such as mountain trekking and mountaineering have, says Porik, been less affected, because tourists perceive that they are safer away from big cities.

Meanwhile in 2009, the Yemeni Ministry of Tourism invested in a major advertising campaign, highlighting Yemen's spectacular landscapes and architecture. The push to develop tourism in this very poor country was helped by increased direct flights. But after the attempted bombing of an American passenger jet by a militant trained by al-Qaeda in Yemen, countries like Britain have halted direct travel, demanding that the Yemeni authorities upgrade their pre-flight security.

Other countries scarred by violence have fared differently. Morocco's tourism industry, for example, has boomed in recent years. Tourists seem to have minimal awareness of its long-lasting – albeit currently dormant – confrontation with Polisario in Western Sahara. Indonesia experienced reductions in tourism after the Bali bombings, but remains a popular destination.

I'm not sure I have any answers here – just more questions. What makes these countries different? In Morocco it might be argued that the conflict was largely away from tourist areas, whereas in Yemen or Pakistan some attacks have focused on internationals or on urban centres that tourists might visit. But the same could be said of Bali, or of London during the IRA's bombing campaigns of the 1980s. Neither of these became destinations to avoid, although Bali was badly hit by the drop in Australian visitors. Is Palestine a complete exception, or could its 'solidarity tourism' model be relevant to other conflict-affected areas – or are fewer of us interested in those other destinations? The Fairtrade movement has recently identified equitable trade as a means of helping to bring economic and political stability to conflict zones – but is it irresponsible to suggest that responsible tourism might serve similar purpose, because it involves suggesting that potentially naïve visitors put themselves in dangerous situations?

Answers on a postcard from North Korea...

This post was originally written on commission for Tripatini's planned 'official blog' project, which was nixed. I've re-posted it here, with a few updates.