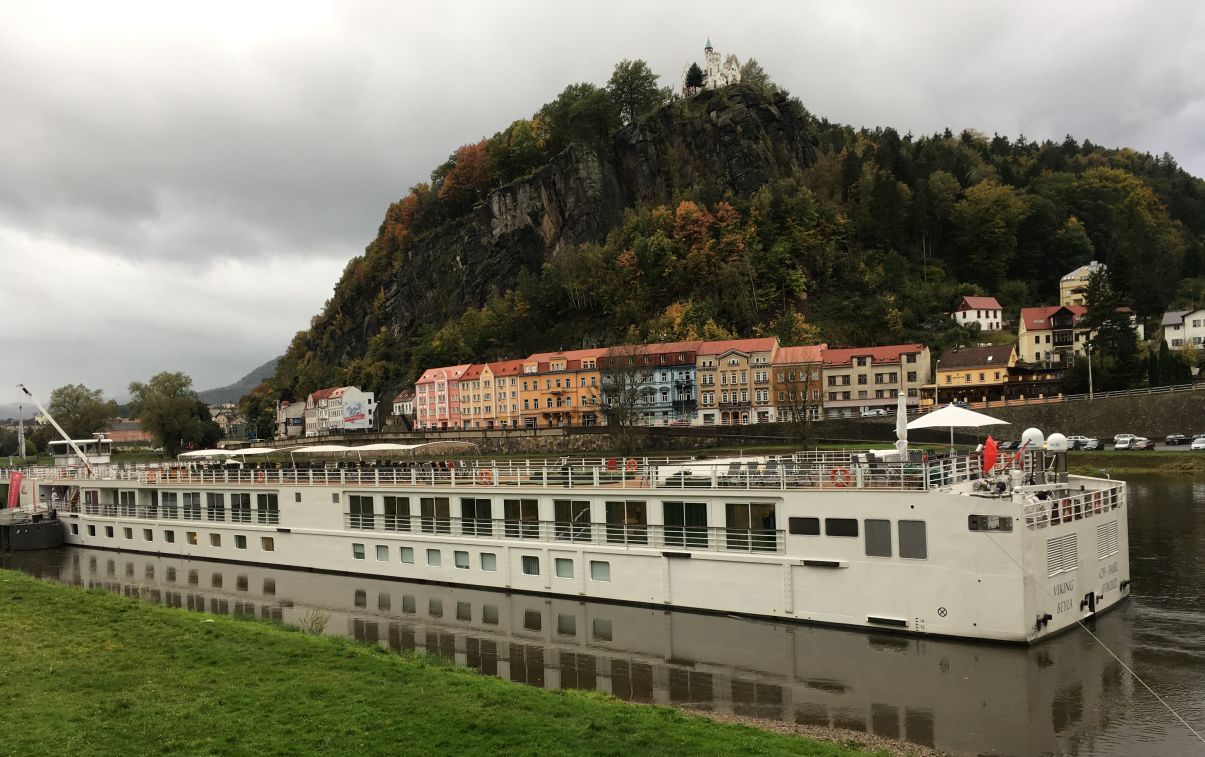 Booking a stateroom for an Elbe River cruise excursion during a colorful October in Germany made my seasonal travels a complete success.  The Elbe River extends through a part of Germany that I had yet to explore with Viking River Cruises. I'd previously done the Rhine and Rhone Rivers with Viking and enjoyed the included excursions. This travel mode allows for seeing a wonderful part of the world at river barge speed, with interesting stops, and in cruising elegance.

This cruise down the Elbe began in Prague, Czech Republic. The river cruise included two nights in a hotel near the central area of Prague. Similarly, it would end at a hotel in Berlin, Germany, for two nights. These terminus stops are organized tours for the cruise passengers and all the famous places are included.

Afoot in Prague and walking along the Vltava (Moldau) River, I found a viewpoint bar aboard the Botel Albatros. The wood paneled bar is aboard a barge hotel and it serves the tasty Czech Budvar beer – the original Budweiser. This is walkable from the hotel in Prague and makes a nice stroll alongside the river walk with people walking dogs and joggers.

One reason Prague is so unique is that the city was not devastated during World War II. The fighting there was minimal and therefore the architecture is largely original from the 1600's. One piece of advice is to take in the Charles Bridge early in the morning before the crowds and vendors.

On leaving Prague, for history fans, the cruise on the Elbe River is equal to the Rhine River. Port stops include Dresden, a still controversial target of Allied bombing in World War II but rebuilt and now fabulous in its medieval history. Moving on the river, those famous films of World War II Americans greeting Russians at the Elbe River all took place in Torgau, Germany. Then, what began for Martin Luther as a protest but ensnarled Europe in religious wars is seen throughout Wittenberg, Germany. Sanssouci, the summer palace of Frederick the Great, in Potsdam.

Outside of Berlin is Potsdam, a day trip away to where the Allies met after conquering Germany and thereafter ordered Japan to surrender. It was from here that US President Truman gave the order to use the atomic bomb on Japan. Potsdam is full of restaurants and shopping. This is the city where one easily can walk with the city people and then eat wonderful German meals, complete with dumplings. It is now a commuter city for bustling Berlin and the cruise city tour shows historic areas with the finest housing estates. It is fun to see the royal palaces in Europe, but perhaps more interesting is where the common people lived and those city-estates of the upper class built throughout Potsdam's history.

Berlin exceeded expectations. Bombing-devastated areas do not appear today as cheaply constructed renewal to provide emergency housing for people after 1945. It is largely as if the war had never happened (even in the former East Germany regions) except for the still evident shell holes that must be left to bear witness. Adolf Hitler isn’t mentioned on signs or maps, but unofficially the tour bus will point out where the famous “bunker” was located (now under a parking lot). This is not to imply Germans avoid history because mentioned in tours is the Aktion T4 program for murdering disabled people that began in Berlin, where T4 is an address on Berlin's Tiergartenstrasse street.

Today's Berlin is a continuous distraction of history, people, shops, food, and architecture. It is just plain fun and over the top for touring adventures. It deserves a full week or more to explore, so perhaps ask for help with extending the reservations if booking this Elbe River cruise. The Elbe River may experience areas of shoal water and changes to the scheduled moorage stops requiring a short bus ride. The Rhine is a deeper river than the Elbe, but both have commercial activity throughout the river’s run. Viking River Cruises surmounted this potential problem by investing in custom designed ships.

The Viking fleet for the river Elbe has custom waterjet steering and propulsion seen in this under-hull photo (courtesy, Viking River Cruises). 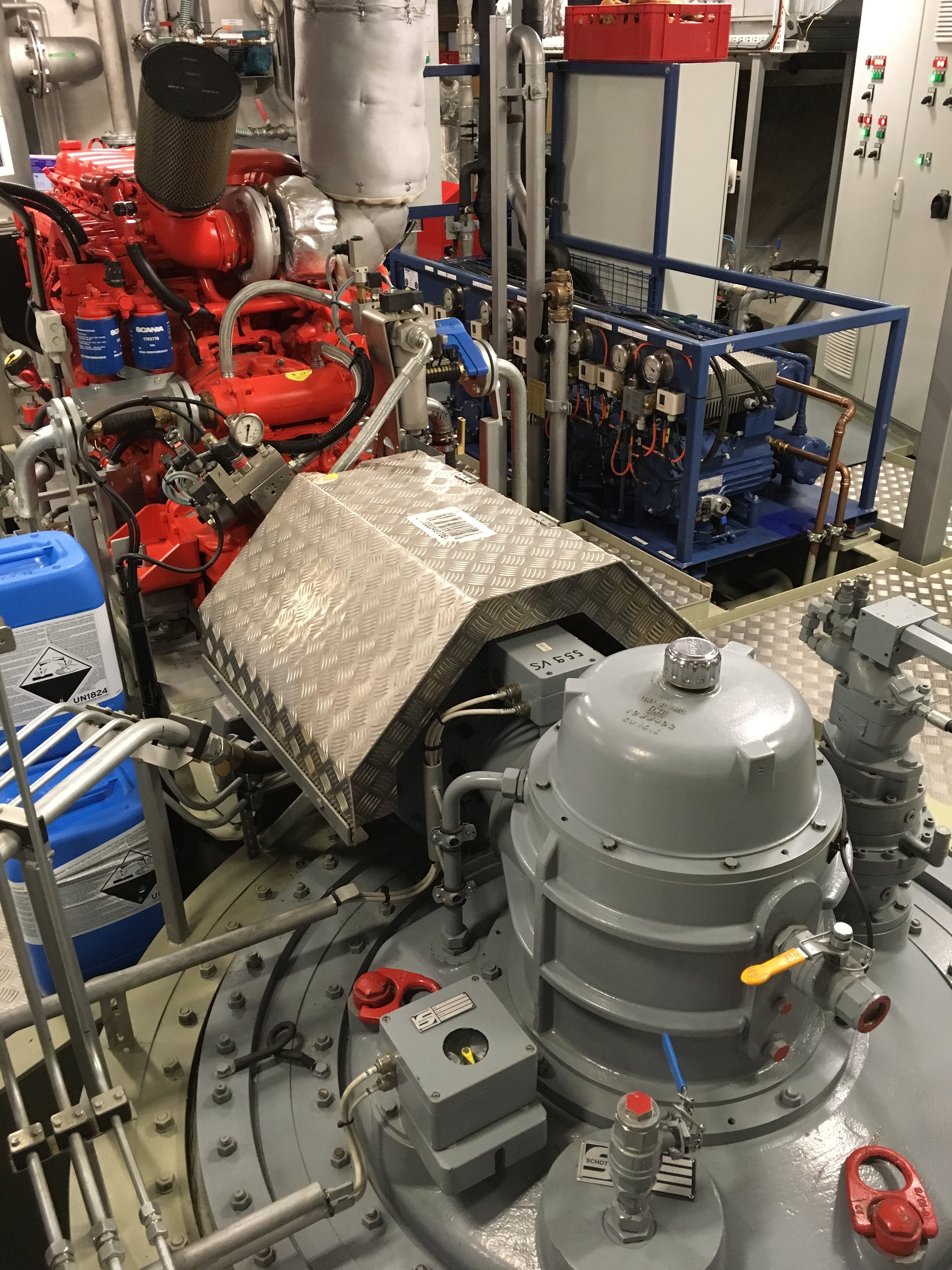 My ship, the Viking Beyla, is motorized river barge, custom built in 2015 for Viking River Cruises along the Elbe from Prague to Berlin. Beyla is smaller (360 feet) than the longships running on the Rhine, yet it is a plush ride for its 98 passengers. The vessel is powered by water jets as opposed to propellers, similar to a Louisiana swamp boat. Built of aluminum for less weight, it requires only three feet of river water, and maneuvering uses directional water jets flush within the hull (see picture above). Beyla's sister ship is the Viking Astrild, also built for the Elbe fleet.

See a Video of Viking Beyla on the Elbe River.

Where in Germany Is the Cruise Ship Now?

When back home, revisiting the Elbe river cruise experience with photos and friends can be enhanced by finding the current position of Viking Beyla on a live map. This MarineTraffic.com service shows all river traffic and ports along the Elbe River, including the Viking Astrild if requested in the search box. 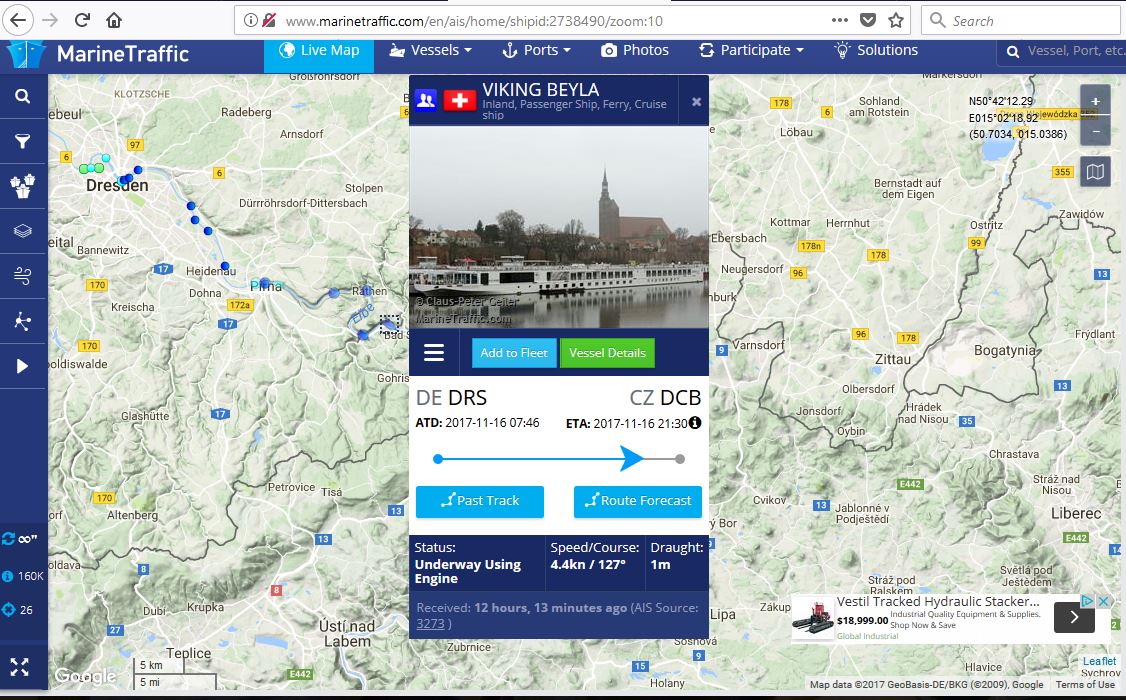 Viking Beyla is now my ship on the live map, and with photos in hand, it is easy to spend an hour going up and down the Elbe River. This is one vacation that I would repeat.

Note: As is common in the travel review industry,  Viking River Cruises provided me with a complimentary cruise for the purpose of review. While it has not influenced this review, I am happy to provide full disclosure of all potential conflicts of interest.