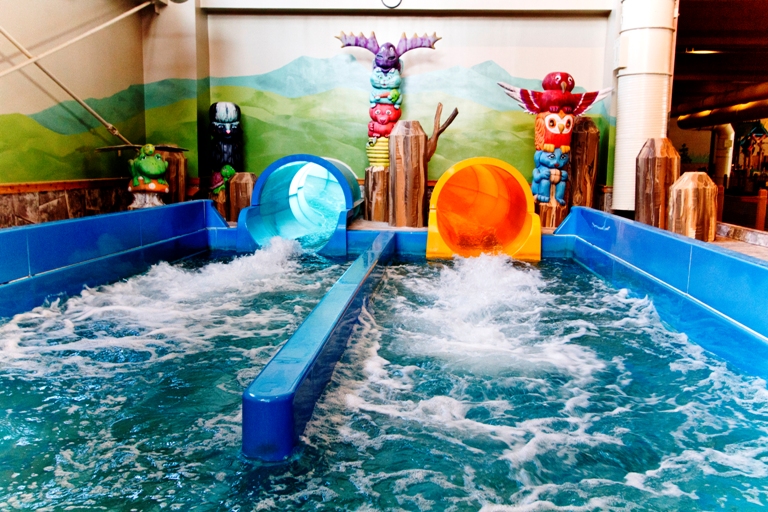 “You want me to get on THAT and go down to where?” I wailed from high atop the Alberta Falls waterslide, looking down to an alleged pool that was well out of visual range.  My 11-year-old grand-daughter nodded with a look of both consternation and resignation that I tried very hard to take in stride.

Such was my introduction to a vast array of unusual children’s activities that mesmerized the 70-year-old kid in me as much as they did Dalya, 14 and Mollie, 11 as we frolicked through Great Wolf Lodge in Williamsburg, VA. (There are 18 such waterparks nationwide).

We could have spent all three days at the resort and still not exhausted the available options. Having to leave to also visit Colonial Williamsburg and Busch Gardens for me was just a distraction. Mollie and Dalya might take issue with that.

There is so much going on at the waterpark that I didn’t know where to look. The pool basketball game, the lazy river, the wave pool, the kiddie pool, Fort Mackenzie, a 12-level interactive treehouse with a section of ascending inter-connected rope tunnels leading to two winding slides, a surf stimulator and, of course, a total of eight waterslides that dominate the park and stretch both inside and outside the building.

And everywhere the smiles were as wide as the lazy river was long. And no matter what the activity, you’re never too far from a potential dousing from overhead buckets both large and small eliciting cries of surprise from bathers of every age.